I met Rachel Jones in a writing class at the Loft Literary Center in Minneapolis. She and her husband Tom are preparing this fall to live in Djibouti (again) to work and live. She is an aspiring writer and wonderful mother. I feel honored to know her and her family. Thank you, Rachel, for contributing to Flash Fiction Friday on Big Bluestem Blog.
(Readers, keep her in mind; she will be a published, well-known author in the future!!) 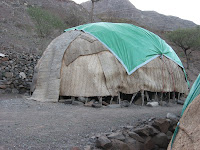 My house doesn’t have walls or floors or ceilings. The two-room bubble hunches over the rocky ground, made of twigs, rags, and animal hides. There is no light and no window and cool breezes never stir the see-through curtain dividing the aqal in half. I have to bend from my waist and shove aside a flap of goatskin to walk through the low doorway. Unsi burns, filling my home with spicy, intoxicating perfume. Everything is drenched in shadow, from the single water jug to my weathered skin.
I am weaving a water basket to meet the needs of my growing family. I pull the dried grasses tight, careful to not leave even a miniscule hole through which water carried from the Jubba River would drip. To save water, I scrub our cooking pot and wash my arms, face, and legs for prayer with fistfuls of dirt. I drink goat milk and one cup of tea every day.
I hear the children playing outside and feel the sharp kick of the one in my belly. My three daughters and four sons play soccer with the cow stomach I gave them at the end of Ramadan. I chant as I weave, poems of boys who have come home from grazing camels or searching for rain clouds. I almost scold the girls for running, showing off too much of their legs but tomorrow they will sit with me, weaving, cooking, sewing. Even Samsam who was born only five rainy seasons ago.
Today is a holiday. Eid Carafo, marking the the hajj to Mecca. No one in my family has ever gone on pilgrimage. I have never even gone into a Somali town. My husband is there today, selling goats and trading for necessities; rice and flour. 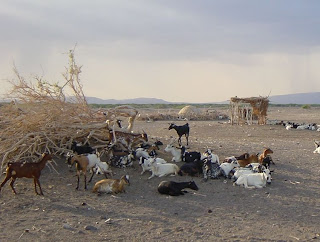 This morning when he left, my husband took too many goats with him. I fear he is trading for more than necessities. I fear he was preparing the bride price for a second wife, a city wife to keep him company. While I was beating laxoox for breakfast, I saw him leading all those goats from our herds and ran after him.

“What are you doing?” I asked.
“Taking these goats to town,” he said.
“Why?”
“To sell them.”
“You’re buying a new wife.”
“Woman, you are half-mad.”
I brandished our knife in his face. “You will not take a new wife.”
“I will do as I please.” He shoved me.
“Ninka awrka cirka arkey dameerka xeerka ka tuurey.” A man sees a camel in the sky and throws away the donkey in his yard.
He spit next to my ankle. “Make a new bed ready for tonight.” He walked away.
“If you take a new wife I’ll die!” I screamed and the wind howled, sucking my words away, blowing them across the desert like dead thorn bushes.
And now I sit, weaving, waiting for my husband to return so we can slaughter a goat and celebrate the forgiveness of our sins and Nebi Ibrahim’s willingness to sacrifice his own son. I told my children the story the night before so that they would know why we celebrate Eid Carafo.

Allah told Ibrahim to take his son into the mountains. He was to bind his son as a ram and slaughter him, offering a burnt sacrifice of praise. Ibrahim obeyed and tied his son to the altar. He raised a knife over his head, ready to thrust it into his son’s heart.
Samsam covered her face with her hands. My other daughters trembled but my sons sat tall and brave.
“Ibrahim!” Allah called to him. “Do not kill the boy. Now I know you love me above all. You are a true Muslim.”’
Ibrahim heard the cry of a ram caught in a thorn bush. He and his son killed the ram and worshipped Allah on the mountain. 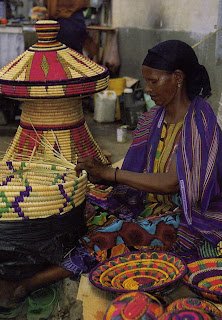 I make a loop of dry grass and shove another blade through it. Tug and yank. Repeat. My mother taught me basket-weaving. She had been minweynta, the first wife. Her husband married three other women, each younger, more beautiful, fatter and more fertile than the last.
When he brought the second wife home, my mother welcomed her with kisses and a new dress. Minyarta, the young wife, slapped my mother and called her an old hag. My father built his young wife an aqal beside my mother’s. He never entered my mother’s aqal again. The new wife was honored and treasured above my mother for four rains, long enough to give birth to two boys.
Then father brought home his third wife. My mother didn’t greet her but sat with her back to the new aqal. The third wife provided two daughters and a son before he brought home his fourth wife. That night my mother wept into her hands as I scraped at her toe nails with a razor. This girl had not begun her time of blood yet. But over time she provided him with four girls and two boys.
If my husband brings home a new wife, I will die.
I pull our knife from the folds of my dress. The shadow from the aqal falls over it, but a sliver of light glints off its blade. I am alone. The children are outside and no other family has settled nearby. There are no women to gossip with, only my growing belly and my fingers weaving, weaving.
I watch my hands pulling and twisting and looping. They are powerful and create watertight baskets. They held eight children to the breast and buried one. They load camels and build aqals, cook rice and spread henna in my husband’s hair. My hands are powerless. They cannot bring the rain or stop hyenas from ravaging our flocks. Tonight they will greet the new wife.
I remember my husband’s command to make a bed ready and set aside my basket. I sweep dust and rocks from our dusty, rocky floor and gather blankets. I consider placing a scorpion between them. I stand back, looking at the sleeping place I have made and run my finger down the dull blade of our knife, drawing no blood.
I duck outside, squinting in the daylight and find a large, smooth rock. I spit on it and sharpen our knife.
I would enjoy the help of another wife, with seven children and one on the way. I would enjoy the company, gossip, stories, and poems of another wife. I would be relieved to share my husband’s endless lust with another wife. My dilemma is that I am a woman and I don’t want my husband to take another wife.
I stare into the nothingness of thorn bushes and dust and picture her face. Our knife slips from the rock and slices my thigh. I feel more concerned about the rip in my only dress than the blood painting my leg and I let it bleed. When the blood slows, I wipe our knife on the ground, leaving red stains in the dirt.
My husband doesn’t return until after dark and it is too late to slaughter a goat for Eid Carafo and the forgiveness of our sins. He isn’t alone but I can’t see the new wife in the dark night. The boys sleep under the moon to keep watch for hyenas. While my girls curl up next to me in the aqal, I worry about our sins remaining on us for another year. I worry that the hate I feel for this younger, more beautiful woman will cause Allah to send me to hell.
I pretend to be asleep when my husband enters. He is speaking with a woman. I smell her perfume and watch her shadowy shape. She is smaller than I expected, her breasts saggier. She doesn’t speak and settles into the bed I made. Without a word, my husband lies down next to her. They don’t talk and soon both are snoring, curled away from each other.
I unwrap my arms and legs from my daughters. I approach the woman. Her face is one with the blackness, her body round and fat, as all second wives should be. I pull my knife from my dress.
I raise the knife over my head, just as I imagine Nebi Ibrahim did. I screech and plunge it into the woman’s chest. Her eyes flash open, their yellowy whites glare at me. Her mouth opens to scream but no sound comes out. Blood pools around her tongue, behind her four rotten teeth.
My husband jumps from his bed. He corners me and tries to wrench the knife from my hand. I slash it back and forth, hissing. He tackles me and steals the dripping knife, slicing my palm. I see my daughters standing in the doorway. My sons have lit our lantern and crouch in the doorway. My husband grabs the lantern and shines it on the face of the woman.
My knees wobble. I faint, falling on top of my mother’s dead body. 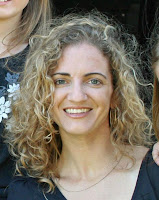 Rachel Pieh Jones has written for the New York Times, The Christian Science Monitor, the Desiring God blog, and Running Times. She lives in Djibouti with her husband and three children and blogs at:
www.djiboutijones.com

Being one of the most fashionable cigarette brands Camel is accessible virtually to any smoker who appreciates the important cigarette style. Affordable worth, prime quality and fashionable style – are the foremost necessary characteristics of this whole. Save it slow and get Blue Camel delivered straight to your chosen destination.
genuine camel online

Oh, how heart breaking. You tell a wonderful story with an important lesson. Great guest column!

Heartbreaking is right. I was completely inside the story. Powerful commentary on communication, trust, relationships, and assumptions.

When you look at each one of these adds above, they all represent happiness, love, being pretty, slim, and so on. online cigarette

I fully agree that idea, especially since I read about the government study which highlighted our state's squandering of cigarette tax revenues and settlement money on other projects. camelblue