The Huffington Post recently published an article titled The Fifteen Funniest Metaphors and Similes Created by Teen Writers. I got such a kick out of them (like Morton Anderson kicking the extra point at a pro bowl game) that I decided to create a story around them. Since most of them deal with a boy and a girl, the story came easily. Enjoy! It's a short one.

He got to know her in art class. He was no good at art. To her, it came naturally. Her artistic sense was exquisitely refined, like someone who can tell butter from I Can't Believe It's Not Butter.

It wasn't just that. She was sexy. Her pants fit her like a glove, well, maybe more like a mitten, actually.

He was deeply in love. When she spoke, he thought he heard bells, as if she were a garbage truck backing up. Since he was so shy, though, he had a hard time bringing himself to share his feelings with her. After class, he waited for the opportunity to say something to brighten her day or make a connection. But every time she stepped into view, he was speechless. He was as lame as a duck. Not the metaphorical lame duck, either, but a real duck that was actually lame. Maybe from stepping on a land mine or something.

The days and months and years passed. The boy did nothing but yearn and wait. He graduated from High School and went to college, growing into a man. And when I say grow, he shot up like a 6'3'' Christmas tree you see in grocery store parking lots.

The young man never married. He eventually went to a therapist to seek advice how he could overcome his fear and finally try to speak with the woman of his dreams.

He told him that he needed visualization to calm himself. That whenever he thought of the woman, he should think of a rowboat gently crossing a peaceful pond. The man closed his eyes and he saw the boat. The little boat gently drifted across the pond exactly the way a bowling ball wouldn't. And the man felt at peace.

Meanwhile, the woman didn't like being single. She was unhappy. She was as unhappy as when someone puts your cake out in the rain, and all the sweet green icing flows down and then you lose the recipe, and on top of that you can't sing worth a damn. Wondering what she should do, she looked at her high school yearbook. She saw the class picture of her junior year art class and the young man who would often smile at her, but who would never speak. She wondered where he was.

After a brief courtship, the two were married and grew close. She grew on him like she was a colony of E. coli and he was room-temperature Canadian beef.

You can find the original article at The Huffinton Post right here. 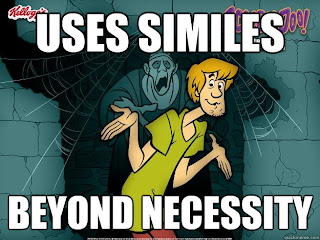 I just giggled myself silly on this!

Love this :) Totally laughed out loud. Loved the huffpost article too--although I only saw 16 similes, not 20.

"Not the metaphorical lame duck, either, but a real duck that was actually lame." I wish I could draw out the vision in my head after reading this. Very funny!