The man always went to the same restaurant on the thirteenth of July. Every year, he would make the journey. It was no easy feat for a man of eighty-nine years.

It was called Le Chien qui Aboyait and it was located along the Rue de la Harpe, just four blocks from the Notre Dame cathedral. The little restaurant was nothing spectacular. It was the typical block apartment, street-level room carved into a building. Unlike American restaurants, it was not spacious. The kitchen was too near the dining tables and the ceiling a little too low. Outside, had not the building wall been emblazoned with large, black letters and a wooden placard with a little white dog barking, you might miss that it was a business.

Their food was "folk Parisian", if there existed such a thing. The first time he came there, he had a noodle dish similar to spaghetti with meatballs. Somehow, it wasn't Italian, though. The chef at Le Chien qui Aboyait had taken a multigrain spaghetti and mixed in Provençal flavors of thyme and bay, adding a thyme and caramelized onions ground into a type of sausage meatball. The whole thing was then topped with Niçoise olives. Neither Parisian nor folk, the man thought the dish strange but tasty. 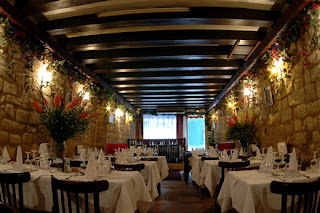 But the quality of the venue wasn't what was important to the man. Nor was the strange dish he ate there.

It was the restaurant where he first proposed to his wife, sixty-years prior.

Colette was his love. They met in the spring of 1952. The man was in the US Army and was stationed in southwest Germany. He was nineteen. From the Midwest, it was his first foray into Europe, and, quite honestly, it was his first time out of his little town of two-hundred people in Wisconsin for any length of time.

That spring in '52, he got a leave and chose to go see Paris. A young, eighteen-year old woman sold flowers on the Ile de la Cité square in front of the Cathedral. The young woman could speak a little English. The man chatted with her and asked her name, she told him Colette. Her hair was dark brunette, but not black. And her eyes had a depth to them; they were kind and playful and deep. He told Colette that she had oceans in her eyes - his attempt at the poetic romantic. She giggled and told him, "But zey are not bleu, how can zey be oceans?" The young man went red.

After a period of wooing and daily letters, the man decided that Colette was the one.

At Le Chien qui Aboyait he proposed to her. She said yes.

They had a wonderful life together. Every year, the man, still the hopeless romantic, would purchase two tickets for Paris on the ninth of July (enough time to adjust, see some sights, visit family); then they would make their way down the linden-lined Rue de la Harpe, to dine once again at their restaurant.

The owner, of course, knew the man. He was sad to see him come by himself in '02.

This year, the man ate what he always did - the strange spaghetti with the sausage meatballs. Once again, he ordered a meal for Colette. He told the owner that he could eat it after he left.

And he looked out the window into the French evening, not feeling quite so alone, because, after all, he was here at Le Chien qui Aboyait. Somehow, he knew Colette was, too.

I like the story--there's a sweetness about it. The description of the 'strange meal' is a nice detail; brings the story to life. Just a general comment, there tends to be a lot of passive constructs in what you write. Maybe that's on purpose, a style thing. I find it distracting sometimes. The story/imagery gets lost in the words.

I appreciate the critique! Nothing like a writer to help another. Sometimes, I don't even realize I'm doing it (passive construction).