I'm back! After a month long hiatus of not writing on the blog and taking care of our busy boys, I'm bringing my creative juices to the fold again.

I have a feeling that most people will hate this. It was a work I've spent thinking about publishing online for some time. Theologically, I don't like its conclusions. The story certainly is depressing enough. But something haunts me about Reanna. We don't know her well, she's fictional after all. All the same her character is our character in the stage of life. Strangely, I find that comforting. I promise that next week's fiction will be much less macabre. Tell me your thoughts. I love to hear from you.

She hadn't realized that she had died.

That's the thing: it went so quickly.

Reanna was only 22 years old. She remembered the car ride. Was she driving? No. It was Carly. Carly was driving. And her sister, Max, was with them. They just had gotten done skiing at Wild Mountain. They were headed back home. She remember that she was high. Max scored some pot off some guys at the hill. She hadn't had that much.

But Carly did. She had at least a couple of bowls. And Carly was drunk. Yeah. Carly brought a flask and was sipping on it the whole time. It probably wasn't a very good idea that Carly decided to drive. Nobody wanted to say anything, though. Least of all Max or Reanna. They were the best of friends. And if they said something to Carly, well, she might not be friends with them anymore. It will be alright. Right?

It wasn't alright. Reanna was dead. 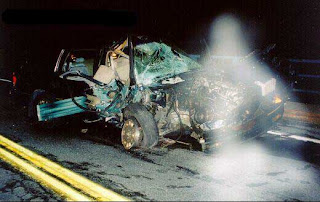 But there's only darkness.

Reanna can't see anything. Actually, she can't hear anything either. Nor can she feel, taste, or smell. In fact, she can't even think. She's gone. Dead. Forever passed.

The only "thoughts" she perceives are actually echos of what once was. Hopes vanquished. The entirety of her existence evaporated like early morning dew in the August heat.

Reanna knows she's gone. Because to know is to make a conclusion. And to make a conclusion is to have rational thoughts (or any thoughts at all - even irrational). But she has no thoughts. She has no brain. She is in the black hole. She has gone to the place where she feared as a little girl. You know, the place all of us fear. Not hell. No, hell is far too real, pain is an unbearable existence, but it is still existence. The place we truly fear is the Abyss. The blackness of non-existence beyond.

The strange thing about it for Reanna is that it is not frightening for her. Neither is it comforting. It is nothing. It is that from whence she came; from No-Thing. Reanna, at one time, did not exist. Now, after the Dodge Avenger which Carly borrowed from her father slammed head-on to the semi in the icy lane, she does not exist again. And she will never exist, neither in Heaven Light Years Away, nor in some toasty hell below.

She is nothing. She is totally at peace.

I don't grasp the end of your blog, Theologically or otherwise.....but I don't "hate" it, either.

Death is just that...it's death. You rightly steer your readers to that understanding of it. This is over and against the Platonic superstitions that have infiltrated much of western thinking regarding a disembodied "afterlife."

Death is still the last enemy..to be defeated.

Interesting flash fiction. The opening is very awesome. Thanks for sharing.